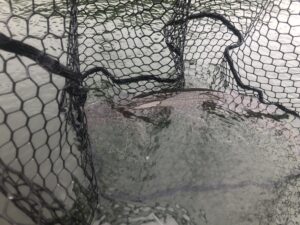 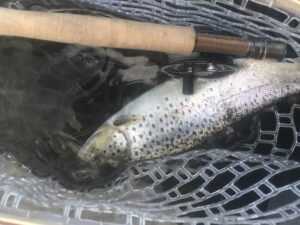 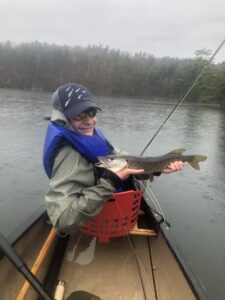 Hi Folks, I always find April and the beginning of May to be challenging fishing in northern Vermont. In part it has to do with inconsistent weather and varying water temperatures. Snowed here in Stowe the last couple of days and the thermometer has dipped below freezing. Looks like a nice warm up for the weekend. I have found varying water temps. My trout fishing has been on tributary streams of the Lamoille and Memphramagog. River temps. Have ranged from 42 to 54 degrees. I did my first guide trip of the season the other day in rain and snow. We used canoes on a small lake to fly fish for northern pike. Good steady wind from the north. We experienced sun, wind, rain, and snow. The surface temp. was 56 degrees. We focused on shallow bays that abutted sharp drop offs into deeper water. All of the pike we located were holding in less than 10’ of water. Good cover for the toothy predators with log stumps, boulders, and forming weed beds providing ambush points. We landed 6 pike. Missed a couple, had a break off, and a few follows. Even had a couple of nice sized smallmouth come and look at the fly. Our fly patterns were either all white or black. Deceiver patterns as well as bunny buggers. We cast floating and sinking fly lines. The takes were hard as we stripped the fly with long slow motions. The fishing was pretty decent even with the nasty weather. The biggest challenge was keeping our hands warm so we could handle the fly line. Trout fishing has been a bit more challenging. I like chasing wild fish so I can’t answer how the fishing has been in the stocked areas. I have landed 1 trout thus far. A nice 16” wild brown tight line nymphing a #14 black double tungsten nymph in a slow deep stable pool. I have been swinging streamers on a sinking line with little success. However, I did roll a huge brown on a white zonker. Of course the fish never showed itself again. I marked the spot for a future visit. I have not seen a single steelhead landed this year. I was lucky enough to watch about 20 fish jump up through waterfalls as they migrated upstream to spawn. I find steelhead fishing mundane at times. Lots of casting and drifting without results. However, when you finally hook one you certainly forget quickly about what went into hooking that fish. My tactics are pretty simple. Perfect your drift and work a few areas really thoroughly. Egg patterns that imitate sucker row are the most consistent flies. There are suckers all over the river spawning. In addition, a spring wiggler works well when the water is low and clear. The first significant hatch of the season is the #14 little brown stone fly. I think the wiggler is a decent imitation of the stone fly even though it was created to imitate a Hex nymph. I have not seen any Hendricksons as of yet. Saw a bunch of midges and a few #18 Baetis hatching but nothing in great mass or that prompted feeding activity from trout. The best is yet to come. The weather will improve and we will be working on a suntan before we know it. Remember to clean your gear and keep the non-native species at home. Have Fun, Willy