It’s not about our convenience 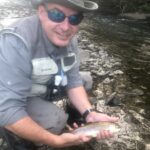 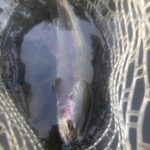 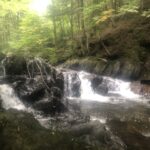 Hi Folks, September is one of my favorite months in Vermont. Beautiful time to be on the water. It has been fairly warm lately with cool nights fortunately. We desperately need rain. I have been mixing it up between small streams and then if rivers. The trout fishing been okay. On the Lamoille and the Winooski the water temperatures have been reaching the upper sixties by late day. The small brooks I have been guiding have been between 56 to 61 degrees. The spook factor has been full on. Trout are nervous nellies in low water. The fish have been holding tight to cover. We have been locating fish in tough casting spots. When fly fishing the small streams there are lots of over hanging branches, downed trees, and big rocks to contend with. All of this stuff hangs up flies, leaders, and fly lines. I like telling folks, “it’s not about your convenience, but the trouts convenience. Meaning you need to be creative with the casting and think about where you position yourself prior to casting. We had a trout come up on a dry fly the other day after my guest used the bow and arrow cast to land the fly into a tight spot. Good fun. Tons of hoppers about. I have been using a #10-#14 green bodied hopper pattern. Still #14-#22 flying ants in the afternoon. I have seen a few sporadic rising fish late day and early morning on the big rivers. #12 Isonychia have been hatching for a couple of weeks. Fish have been eating #12-#14 Hare’s Ear parachute, #12 Adams, and a #12-#14 crippled Isonychia pattern. Lots of #14-#16 olive caddis on rocks in riffles. They should begin hatching anytime. The fishing has been okay for the first part of September. Bright sunny days make it tricky, especially with the low water. The fishing is becoming an afternoon thing. Particularly when we have cool nights. The fishing will improve with some rain, cloudy days, and as the sun gets lower and lower in the sky. Thinking about chasing smallmouth and pike over the next few days. Remember to clean your gear and keep the non-native species at home. Have Fun, Willy