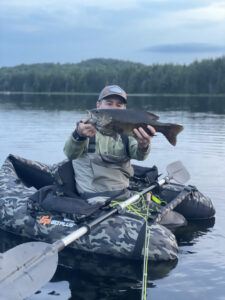 Hi Folks, The bass fishing has been pretty darn good. I have been on the water daily with clients and my focus has been pursuing smallmouth bass with fly and spin gear. Mostly been fishing from canoes, my motorboat, and float tubes. I have mixed a couple of river trips in between for Brook trout and river Smallmouth. Water temperatures have been ideal for bass fishing. The lakes and ponds I have fished have ranged from 71 to 75 degrees. The best fishing has been early morning and the last hour and half of light. Or at least the top water fishing has been best at these times of day. Wind has been a bit of factor but it has been generally calm early and late. I guided a trophy smallmouth from the float tubes a couple of days a go. A 21” measured smallmouth. Had to be all of 5lbs. and fought like a champ. A good battle on a 6wt. rod. We landed a 18.5” bass prior to the 21” fish. The girth of the larger fish and its mass to the tail was very noticeable in relationship to the smaller bass. We did hook a bass under 15”. Big smallmouth pull back! Some awesome tail walking and jumping. We changed fly patterns a bit that evening as the fishing was slow until the light got low and the wind laid down. Large #4 deer hair bugs with rubber legs in red,black, and white as well as a frog deer bug induced some big strikes! Typically over the last couple of weeks, smaller patterns have produced. The fish wanted a bigger morsel. We located bass off points of small rock humps with sporadic weeds. The cadence of the retrieve was important. Pop pop pause. Pop pop pause, kaboom. Spin fishing for smallmouth has been pretty consistent. The top water plug has a been a frog and a black colored Heddon Torpdeo and tiny torpedo. We have also been finesse fishing with a 4” crawfish colored Senko. The fish seem to be dialed into the crawfish color and the smaller rubber worm has been more productive than a larger 5” worm. The common denominator on locating smallmouth has been rocky shoreline that plummets into deep water where there are downed trees. Not all downed trees are alike. I find that the tress that have been down in the water for a few years tend to hold more fish than the newly felled ones. Had a large party for a river trip  yesterday.My employee and I split up the group and took half Brookie fishing and half river bass fishing. The Brook trout fishing was very consistent with 20 fish being landed. All on dry fly patterns. #12 Royal Wulff, #12/#14 rubber legged Royal Trudes, and an assortment of #12/#14 Stimulators have produced. Small trout stream temperatures have maintained between 58 to 63 degrees. The water was low but the rain last night and this morning has given us a nice charge of water. A nice soaking rain. With the water coming up and going down, nice time to look for a big trout in small water. The river bass fishing has been decent. Seems more productive in the morning. The top water bite has been best if cloudy. Otherwise, swinging streamers has been the method. Catching lots of other fish on the fly as well. Fall fish, rock bass, perch, pickerel, and sunfish. Not the target species, but nice for beginning fly anglers who are learning the process. July has been a decent fishing month and I anticipate it stay that way with some rain now and not any super hot days in store. Remember to clean your gear and keep the non-native species at home. Have Fun, Willy