Oh the last hour of light 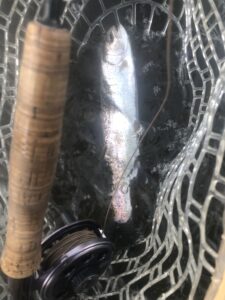 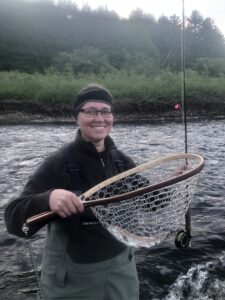 Hi Folks, The fishing was really good last night. Specifically the last hour of light and into dark. The Lamoille was 64 degrees. With the cold air temps. last night the river will cool off even more. Sulphurs were hatching everywhere last night. The #14 Ephemerella dorothea came off in gang busters last night around 7:30 pm and intensified towards dark. The trout began to rise steadily around 8:00pm. The fishing was pretty slow for the first couple hours of my trip. I had aspiring fly anglers. Good for us that we got to get acclimated with the fly gear prior to the fish turning on. It was a fairly sunny afternoon and once the light became low in the sky, things really turned on. We initially swung #14/#16 pheasant tail nymphs and #14 red fox squirrel nymphs in a riffle as we saw the hatch begin. All of our strikes were down stream of our wading position and the takes were solid. It is important to not over strike on a down stream take. The trout began to rise on seam lines, in the pool, and in eddy lines. A #16 Adams parachute and #14 Sulphur parachute were the ticket. A nice mix of wild and stocked trout rising. Earlier in the afternoon we examined rocks in riffles and they were loaded with #14/#16 olive/green bodied caddis. We did see a few #14 mottled winged olive bodied caddis hatching along with the Sulphurs. It is a great time of year to be fly fishing on a Vermont stream. The last hours of light are magic as long as the water temps. remain cool. Remember to clean your gear and keep the non-native species at home. Have Fun, Willy