The River of Big Fish 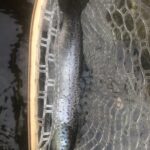 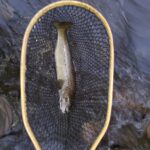 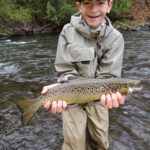 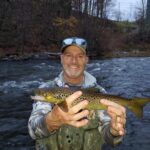 Hi Folks, The end is near. Snowing right now at my house. I am wrapping up my open water season on Halloween. I will be offering ice fishing trips this winter. Probably start up by mid to late December. All predicated on the hard water forming. I have been spending some time up north on the “river of big fish.” The salmon fishing has been terrific. Water levels came up with recent rains and the fish responded. Water temps. have varied from 49 to 52 degrees. Cooler temps. can be expected with much cooler. nights. We have been swinging flies. No nymph fishing.
and certainly no Czech Nymphing. I question whether Czech nymphing is fly fishing. I never see fly line come off the rod tip let alone be cast.  Looks to me like folks are casting weight and a weighted lure. Last time I checked the definition of fly fishing it reads the act of casting a weightless fly using a flexible rod  with a weighted line. Every fish I have seen caught has grabbed a wet fly or streamer swung. A dead drift swing with several initial stack mends in order to get the fly down slightly. All of the takes have been at the end of the drift as the line becomes tight. This is done with a WF 6wt. line with a 12’ tapered leader and 1x tippet. I don’t find the salmon line shy and you don’t want to break them off by using light tippet. We are casting #6-#10  Black Ghosts, Nine to Threes, and Magog Smelt patterns. The Ghost has been the top producer. All of the fish are being hooked at tail outs of pools behind or in front of boulders. These fish need resting areas as they move upstream. Cover is essential for them as they move through heavy water. Resting spots. There are some large lake trout present in the river currently. An added bonus while chasing salmon. Well get your casts in because we are winding down on another season. Remember to clean your gear and keep the non-native species at home. Have Fun, Willy