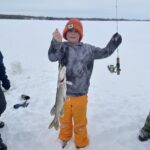 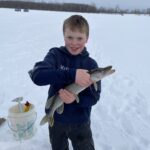 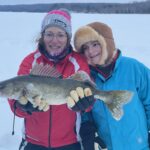 Hi Folks, I have been spending the last few days chasing pike, walleye, and yellow perch. Lots of ice to walk around on. Recent snow has made the ice a little sloppy to walk around on. A bit of water on top of the ice. It is created by snow pack which insulates the ice and melts from the bottom up. Perfectly safe, you just need good dry footwear.  The two lakes I have been guiding had 9” and 18” of ice. The pike fishing has been pretty consistent. The bite has been the most consistent late afternoon to dusk. The bigger fish have been most responsive at dusk. Large golden shiners and 7” to 10” yellow perch under a tip up have produced. We have chasing pike in 6’ to 12’ of water depth. Where we encounter heavy weed growth we have setting our baits above the weed line approximately 3’ under the ice. Pike are sight feeders. A struggling flashy bait fish attempting to find security in the weeds gets the attention of a hunting northern pike. The fish of the last few days was a large 26” female walleye. It was a quality versus quantity sort of a day. We caught the fish late afternoon in 15’ of water on a drop off. She ate a minnow tipped off a fire tiger Hali jig on the bottom.  A heavy fish that did not come to the hole easily. Always a trick getting a big fish up through the hole. Very exciting. The perch fishing has been decent. Lots of action jigging small minnows. Every so often we have had a pike eat the jigged minnow which is always exciting on a light action jig stick.Trout fishing this week. Remember to clean your gear and keep the non-native species at home. Have Fun, Willy