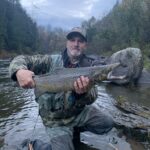 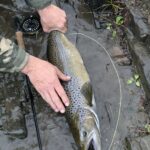 Hi Folks, It has been awhile since my last post. Enjoying the incredible stretch of weather October has brought. No frost as of yet, pretty good foliage season, and the water temperatures have not cooled off too quickly. Typically this time of the year our trout water has really cooled down. Common to see river temps. in the 40’s. Not this year. I have not recorded a temp. under 50 in either the Lamoille or Winooski. Not too much for hatching bugs. A few random #20-#22 Blue Winged Olives hatching midday, but I have not seen any rising fish. Every trout caught in October has been below the surface either nymphing or ripping streamers. The main stem Winooski has been a lot more productive that the Lamoille. My feeling is the caring capacity in the Winooski is much greater than the Lamoille. Deeper primary pools which is important in the winter and the hot dry summers we have experienced. A lot more bugs and forage for fish to eat and the Winooski drainage has had substantially more rain that the Lamoille this season. There are stretches of the Lamoille that feel like you are fishing the Dead Sea. I think a high  percentage of adult trout flee the main stem Lamoille during hot summers for cooler refuge in high gradient tributary streams. My guests have landed very few wild trout in the Lamoille and the stocked fish look pretty emaciated and fight like a hooked wet paper towel. The Winooski wild rainbows have been dynamite. Strong and full of fight. Nymphing #12 red threaded tungsten Prince Nymphs with #18/#20 soft hackle droppers and BWOs nymphs has been efficient. Dead drifting and swinging #6/#8 olive, black, and white wooly buggers  has also worked well. October for me means landlocked salmon. I love casting a fly to migratory salmon. I am not a troller in lakes and I have limited opportunity to cast to land locks in the spring and fall when the enter river systems. Yesterday morning was my day. Maybe one of the largest Vermont River fish I have ever landed. 28” salmon that I’m guessing was in the 7lb class. It ate a swung #8 feather wing black ghost. The fish jumped 7 times and gave me everything I could handle on a 6wt. Absolutely spectacular! Water levels were pretty decent and the increased flows seem to have brought a good batch of fish from the lake into the river. I prefer to swing classic New England style streamer patterns for salmon. I like black ghosts, grey ghosts, governor Aikens, nine/three, the Magog smelt, and the reliable Mickey Finn. However, the fish do not always want to rise to eat a swung streamer and many anglers nymph for salmon under an indicator. Very effective drifting big nymphs like Princes, Pheasant Tails, and Copper Johns. However, drifting nymphs over spawning fish is not okay. Good way to foul hook a big female on a spawning bed. The spawning fish are obvious, leave them alone!!! Well, 1 week left in the season. I will be fishing. Remember to clean your gear and keep the non native species at home. Have Fun, Willy