Catching Fish with attitude and teeth 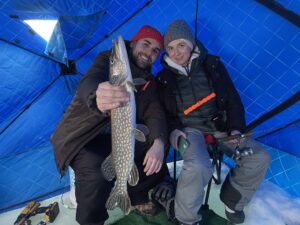 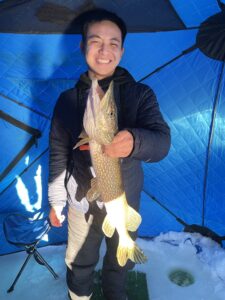 Hi Folks, The ice fishing is still in full swing.Lots of ice out there.I’m finding anywhere from 15” to 24” of ice depending on where you go. The most recent warm spell and rain made little impact on the ice integrity. The rain did make the edges a little wet, but the the last few nights of cold firmed things up. January and the beginning of February have been darn cold. Snow pack has been okay. The lack of snow has allowed the ice to really form this season. I have guiding trout and northern pike trips. The trout fishing has been tricky. Catching lots of yellow perch on tip ups set for trout and jigging up smelt on Hali jigs tipped with maggots. Frustrating! Though the tip ups have produced some large yellow perch. Smelt under the ice on a tip up set in 15’ to 40’ of water has produced a trout or two. Tip ups set near rocky shorelines and points with crawlers has drawn interest from rainbows. The pike fishing has been terrific. We have been catching fish using tip-ups and jig sticks. We have been fishing in 7’ to 15’ of water off sharp drop offs. Each drop off has a weed bed on the edge. The shallow set tips ups have been 3’ to 7’ under the ice and the deeper water sets have been just off the bottom. Large golden shiners dead and alive have worked well. Small yellow perch have also been productive.  We have had our best results jigging pike! Fire tiger Hali Jigs tipped with minnows and a soft plastics Berkeley swim bait on 1/4oz. jig have stuck fish. Lots of chumming in the holes has been bringing in the toothy predators. Tons of fun bringing a large pike through a hole in a shanty on a tiny jog stick. You can see the fish below you in the hole as you fight them. Good steady action. As the weather improves and warms, the pike fishing will only get better. Still plenty of time to get on the ice. Remember to clean your gear and keep the non-native species at home.Have Fun, Willy