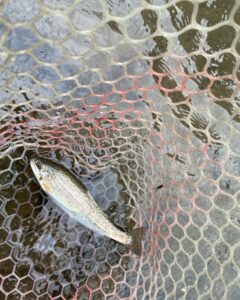 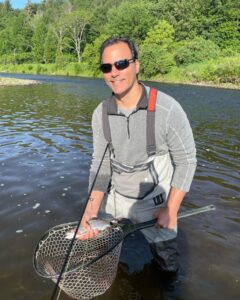 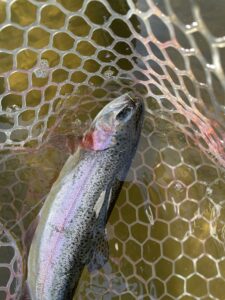 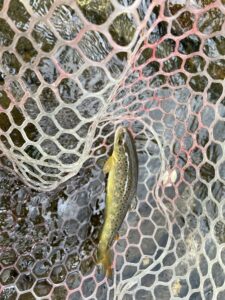 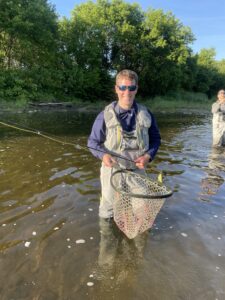 Hi Folks, Nice to see the weather change. Our river temperatures were beginning to creep into an uncomfortable range for river trout. The Lamoille and Winooski water temps. were 68 degrees as of Friday afternoon. With cooler nights the water temps have dropped significantly. In essence, the cool down prolongs fly anglers opportunities to fish the main stem of the Lamoille and Winooski for a longer period. It is not uncommon that our big rivers will become too warm to fish by late June and could stay that way for a couple of months. The bug activity had been steady until the arrival of the cold front. The wind, rain, and dropping temps. appeared to slow down hatching or at least trout feeding on emerging insects. Lots of caddis have been hatching over the last week. Small #18 black caddis and #14/#16 olive bodied caddis as well as #16/18 caddis pupa small over rocks in riffles. We have been catching trout nymphing for the most part. A #16 olive Slaughter caddis pupa, #14/#16 olive wire caddis, and an #16 electric caddis have all been effective. I like rigging the caddis nymphs as a dropper of a #12 tungsten red threaded Prince nymph or a #12 Copper John. Yesterday, with the damp drizzly weather we caught wild rainbows and browns fishing a #18 Baeltis nymph and a #18 peacock soft hackle. I have been seeing a few mayflies coming off at dusk. Mostly #16/#18 Sulphurs and a few left over #10 Drakes. #12/#14 Yellow Sallies have been prevalent our smaller trout streams.  A #14 bright green bodied stimulator is a great match the hatch pattern.  time to be looking on still waters for hatching burrowing Mayfly’s such as the Hexangenia.  The bass fishing has been very good. The smallmouth are still in close and prior to the cold front were pretty agreeable to eating popping bugs. Lake temps. had been up to 64 degrees. June is a great month to go fishing Vermont. Remember to clean your gear and keep the non-native species at home. Have Fun, Willy